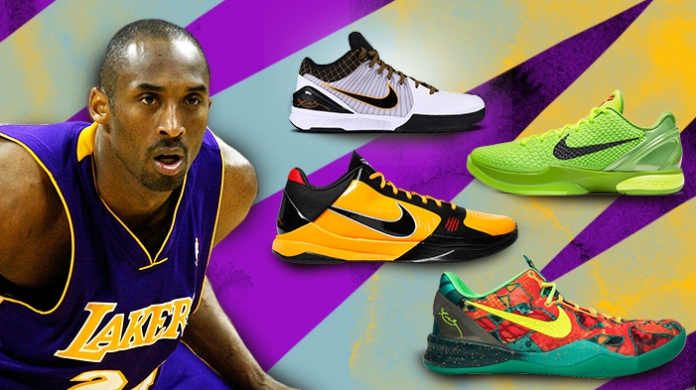 Healthlytalks.com is reader-supported. We may earn a commission through products purchased using links on this page. Learn more about our process here

Do you want to find the best Kobe shoes? This is the right place for you. There is no doubt that Kobe Bryant is one of the greatest basketball players of all time. In addition to fans and generations, countries and sports have all benefited from his fame. It’s obvious that his shoe line is among the most recognizable in basketball and even in the history of sports.

The signature line of shoes from Kobe Bryant has been around for many years, producing more than a dozen models, each with its own features. We have put together a comprehensive list of the best Kobe shoes you can buy if you are a big fan of this signature shoe line.

The Nike Kobe VI is also quite amazing in terms of its overall performance, but many people regard the Kobe IV as Kobe Bryant’s greatest ever sneaker. The height of Kobe’s Black Mamba persona occurred at this point. As such, the Kobe VI comes with a snake print design that fits Bryant’s profile as a player while also standing out on its own as an aesthetically appealing sneaker. In fact, the Nike Zoom Kobe VI Grinch is still one of the most sought-after shoes in terms of aesthetic appeal.

In terms of its performance, the Kobe VI is lighter than the Kobe IV but also comes with a form-fitting sock liner that gives you a comfortable custom-fit feel that any player would really love. It has a more sculpted appearance that looks great for narrow-footed players but it actually performs well for other types of playing styles as well.

With the Kobe VI, you get a thick layer of foam that provides a comfortable cushion and absorbs impact well regardless of the style of play you prefer. Nonetheless, what makes this inner foam unique is that it is quite bouncy, giving you the responsiveness you would want in a good pair of basketball sneakers. Because of this, it is ideal for those who attack quickly with a sharp first step.

With all of that said, even though the Kobe VI may not be as innovative as the Kobe IV, it was one of the first low-tops and is considered one of the greatest Kobe Bryant sneakers of all time. Besides being lightweight, comfortable, and breathable, it is also extra responsive. The Kobe IV is still preferred by some over this one because of this.

One of the best designs of all time can still be found on the Kobe 1. It’s the first sneaker the legend wore with Nike, and it still holds up as one of the greatest. This shoe delivers a great deal of support and has an incredibly soft feel due to its padded collar, internal sleeve, and full-grain leather construction.

A lot of cushions are provided here. In addition, it comes with Nike’s Zoom Air technology, which is designed to complement your playing skills. In addition to the rubber outsole, the herringbone traction pattern is also beneficial.

They are not the sleekest or most attractive pair of Kobe’s available, but that is the only downside. They appear bulky, which some people may not prefer. Their weight is also higher than that of similar pairs. However, if you don’t mind their appearance, you’ll be pleased with their performance.

An excellent shoe should always be strong and sturdy, but a lighter shoe is also beneficial. You should consider the Fury if you want to jump higher, move faster, or just prefer a low-profile design. The Zoom Air cushioning makes it easy to wear and comfortable to wear.

There is no better sneaker for agility than this sleek model. An extended rubber band runs along the sides and it has a minimally structured upper. This allows you to be agile and flexible while still providing the support you need to reduce injury risks.

A negative aspect of this particular model is that it can be quite squeaky on the court. Despite being able to rely on the traction, the shoe is somewhat noisy when you move.

It was the first pair that used engineered mesh, which became a standard for many others in the future due to how light and durable it really is. Kobe Bryant’s Kobe 8 System is another of Kobe Bryant’s revolutionary sneakers. The Kobe 8 weighs approximately 9.8 ounces and was the lightest Kobe Bryant shoe at the time of its introduction because of its engineered mesh upper material.

Most people will say that the Kobe IV has the best traction out of the Kobe shoes but the Kobe 8 takes that to another level with its amazing pattern allowing it to firmly stick to the ground so you can avoid injuries and move easily while on the court. Also, the thin tongue on the shoe makes it very easy to lock your foot down, adding to its overall comfort. You are able to insert your foot into the shoe comfortably without cutting off your circulation.

In comparison to previous Kobe 8 iterations, the Kobe 8 does not feature thick cushioning. A Lunarlon cushion, on the other hand, distributes impact evenly on your foot to reduce fatigue in certain areas of your foot, not by using thick foam.

Nike Kobe 8 System improves on many of the features that have made the Kobe signature line of sneakers so popular and so amazing in the first place. Originally, it was the lightest basketball shoe available and provides a good combination of comfort, traction, and support. It also introduced an innovation that would soon become the standard for other basketball shoes in the future. Kobe shoes like these are highly recommended for everyone who enjoys basketball.

Designed by Kobe Bryant for his alternate persona, the Mamba Focus is a very strong shoe. Additionally, the shoe features exceptional traction as well as an external TPU shank and clean looks in every color option. The shoe’s on-court performance greatly benefits from these features as well.

This shoe is also top of our list due to its Zoom Air unit, which enhances general responsiveness, one of the most important characteristics on the court. Regardless of how much you play or practice, these will hold up well, look sharp, and let you execute quick cuts with ease.

There’s nothing particularly great about these shoes because they run narrow and small. Those with narrow feet won’t notice, but those with wider or larger frames might not enjoy the fit. In spite of that, it’s a minor complaint when compared to the overall quality of the product.

How to Choose the Best Kobe Shoes?

You should keep an eye out for each of these characteristics when choosing new shoes.

Despite basketball’s fast-paced nature, it puts a lot of pressure on your feet. In this regard, you should try to find comfortable, soft shoes that have plenty of padding. Doing so will help you prevent blisters, as well as other uncomfortable injuries. Your feet will also be protected from hard landings if you wear them.

The performance of your shoe is also important. You want footwear that enhances your game regardless of what brand you buy. Select models with good traction, extra flexibility, and lightweight features. Your ability to run, jump, and cut will be enhanced.

The materials Kobe Bryant shoes use have always been in the forefront of innovation. This year’s Kobe 8 was the first to feature engineered mesh, and the Kobe 9 was the first to feature Flyknit, which became the standard for many other signature shoes in the future. In other words, you should always consider the materials used for Kobe shoes for the reason that they make the shoe more breathable and lighter.

Even if you are a guard that plays differently than Kobe Bryant, you still need to consider the traction when doing sharp cuts or charging with your first step.

Many of Bryant’s signature shoes have been low-top designs for the past several years that were considered dangerous for your ankles. Kobe shoes must provide support for your ankles without limiting your ankles or adding additional weight to your feet, so that you don’t hurt your ankles.

All of the above shoes work extremely well. Please feel free to ask any other questions you have about Kobe shoes in the following section, I’ve answered a few of the most common.

Why is Kobe Bryant Called the Mamba?

After watching the movie Kill Bill in 2003, Kobe came up with the nickname after watching the scene in which a black mamba was used to kill another character. Since then, it has stuck and has become part of his identity on the court.

What are Kobe Bryant Shoes Called?

Throughout the years, Kobes has produced an extensive range of sneakers. Although all belong to the same Line and bear the player’s name, they each belong to a larger group. That includes the Nike Zoom Kobe I, the Kobe 8, and everything in between.

What was Kobe’s Favourite Shoe?

The Kobe 5 is believed to be Kobe’s favorite shoe due to its balance between durability, cushion, and strength. The shoe also looks fantastic.

Does Kobe Bryant Have a Lifetime Contract with Nike?

Not at all. The shoe giant had to renew Kobe’s contract every few years, despite it lasting for a long time.

Why Did Nike Stop Selling Kobes?

In the wake of Kobe’s tragic death, Nike parted ways with his estate. Vanessa Kobe, Kobe’s wife, was frustrated with Nike because his shoes were only available in limited quantities. Additionally, she wasn’t happy with how the line wasn’t marketed to children.

What was the First Kobe Shoe Ever Released?

Kobe Bryant endorsed several Adidas shoes during his time as an Adidas athlete, but the Adidas KB8 was the first shoe line bearing his name. Kobe Bryant and the Los Angeles Lakers won the first championship of their three-peat following the release of the song in the mid-2000 playoffs.

How Many Shoes Did Kobe Make?

Kobe Bryant released 22 signature sneakers in his 41 years of age in the years before his death in January 2020. Kobe Bryant did however release 20 additional shoes that bear his name, but they are not part of the main Kobe Bryant line.

Kobe Bryant stands at 6’6″ and features feet that are as large as his height and frame. Kobe Bryant has worn size 14 basketball shoes throughout his career.

Though Kobe Bryant’s shoes have never really been known for their comfort, because of their lightweight and breathable materials, low-cut profile, and snug fit, they are actually pretty comfortable.

Former Kobe shoes featured a thick, responsive cushioning made specifically for guards. As Kobe Bryant developed more skills as he grew older, his shoes became less cushioned but were designed to reduce impact and fatigue. Moreover, Kobe’s shoes had always been built to provide the stability necessary to perform quick first steps and sharp movements.

That’s all there is to it, folks. Hopefully, this guide to the best Koe shoes will help you find the right pair for you. You will find a lot of similar-looking products on the market. All the factors we have discussed here must be considered before choosing the right one.“Nike Zoom Kobe VI BHM Black History Month” is our overall best product which contain features like easy to use, lightweight, durable and many more  features it has.

“Nike Men’s Kobe Mamba Fury” editor’s choice which contains features like lightweight, durable and many more. Sharing this guide with friends who want to buy the product will help them out. Have fun shopping!

Healthlytalks.com is reader-supported. We may earn a commission through products purchased using links on this page.